Born after WWII into a large military family, Frank went to 13 grade schools. Although he showed interest in art at an early age, it was never encouraged. With his father stationed in Ohio, upon graduation from high school he chose to study art at Ohio University. There he received a good exposure to art and art history. But his real artistic enlightenment and advancement came under the tutelage of Henry Hensche, a gifted teacher of light and color, at the Cape School of Art, Provincetown, Massachusetts.

Frank became a sign painter operating as Spino’s Signs. It allowed him to continue to improve his artistic skills in design, brushwork and the use of color. This eventually led to the pinnacle of his career - billboard painting, where he advanced to be able to paint a 10' x 30' board in a day. With the advent of computers and large format printing, billboard painting became obsolete, so he purchased a Macintosh computer and taught himself computer graphics. He spent the next twenty years improving those skills in the fields of graphic design and printing.

It was with the passing of his mother in 2010, that Frank realized he had a limited amount of time left and that if he was ever going to pursue painting, now was the time. With the unfailing support of his wife Susan, he painted on Saturdays for four years.  Upon retirement in 2014, he is now free to paint full time. 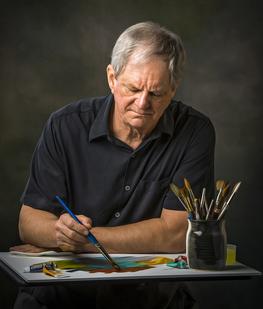